Benign Prostatic Hyperplasia: How To Tell, Treat & Prevent It

One of the most widely-spread male urologic diseases is benign prostatic hyperplasia (BPH). Such name was applied since 1998 according to the new International Statistical Classification of Diseases and Related Health Problems instead of “prostate adenoma”. The pathology is mainly met in middle-aged or elderly patients. Since there is a tendency to increase of male life span, the quantity of patients suffering from benign prostatic hyperplasia has considerably increased. In connection with increase of urgency of an issue, there is a constant search for more effective and sparing methods of treatment.

Benign prostatic hyperplasia starts with insular area and then embraces lateral parts. Further growth is explained by hyperplasia of paraurethral glands that increase in sizes towards the exterior part of prostatic gland. As a result, there is a shift of neighboring organs: inner sphincter of urinary bladder gets displaced upwards; terminal part of urinary tract gets prolonged. Also, the gland increases towards rectum ampulla.

In case of impairment of metabolic processes in prostatic tissues there is an increase of cells life duration. Resulting from long-term life span, they have time to divide more times than usually which leads to alteration of organs volume. Uncontrolled male organ’s tissues growth is called hyperplasia. Since the growth occurs only within the borders of prostatic gland and doesn’t give metastases, the tumor is considered to be benign. The cause of malfunctioning of glandular cells is impairment of hormonal balance in the process of age-related rebuild of organism. At the age of 50-55 years men experience the decrease of male sexual hormones production. Along with that, there is a concentration of some female sexual hormones that trigger the change in metabolic rate in prostatic cells. With the age, a man experiences higher odds for pathology development. Thus, men at the age of 55-60 years appear to have BPH in 50% of cases; for representatives of the stronger sex above 60 years, this statistics goes further up to 80-90%. The concurrent factors able to boost the probability for pathology disclosure are overweight and hereditary predisposition.

Forms and Types of Hyperplasia

Regardless of the common moments in mechanism of this pathology development, the process of tissues growth may occur in different ways. While diagnosing, the structure of tumor, its location and growth direction are taken into account. Depending on these characteristics, each individual case may be different from standard clinical picture. Also, there is a generally accepted division into three stages of the disease where each of them has a certain number of symptoms.

Adenoma Types According to Location and Growth Direction

According to localization, there are three types of the pathology:

The most pronounced symptomatology belongs to intravesical hyperplasia. The growth of the swelling occurs towards urinary bladder in this case. First, prostatic gland underpins the bladder’s bottom and then it grows into it causing considerable deformation of urethral cervix and upper section of urethra. Further growth of the tumor causes an increase of external pressure on urinary channel that leads to gradual narrowing of its lumen. This type of the pathology is characterized by urination disorders: urge or difficult urination. In case a patient doesn’t treat this disorder at an early stage, one of its complications may turn into a renal failure.

First of all, prevesical growth of tissues induces increase of lateral parts of prostatic gland. This swelling doesn’t lead to considerable alterations of bladder’s shape and its cervix. The disease doesn’t have pronounced symptoms; therefore, a man may not notice its development for a long time.

Undervesical hyperplasia is tumor swelling that is localized in the back part of prostatic gland adjoining to straight intestine’s wall. This type of pathology doesn’t result in impairment of urination process. Nevertheless, it may take impact on functioning of upper urinary tract and kidneys. Undervesical swelling tends to cause feeling of discomfort during defecation.

According to the type of tissues growth, there are two types of adenoma:

Prostatic gland consists of several types of cells: muscular, glandular (producing secretion) and stromal (they participate in formation of connective tissue). The structure of swelling depends on the character of tissues it started to form in. The type of benign prostatic hyperplasia can be determined by means of cytologic analysis of tissues samples. Sampling is made with the help of prostate biopsy.

Upon termination of laboratory tests, the one of the following adenoma types are identified:

The tumor’s structure includes cells releasing prostatic juice and connective tissues cells. The growth of cells in this case has uniform character.

There is increase of the quantity of glandular cells. To confirm this type of prostatic hyperplasia, it is possible to estimate increased level of prostatic specific antigen. Most men have glandular adenoma in the form of multiple nodes that get gradually increased in size. The characteristic feature of this pathology is slow growth of swelling. Due to the absence of symptoms, patients do not guess of the disease progression. Very often the disorder is exposed accidentally during prophylactic examination or in the process of diagnosis of another disease.

The distinctive feature of benign prostatic hyperplasia is separation of nodes and indurations by protective capsule from connective tissue. Swelling growth is made of stromal and glandular cells. The exposure of fibrous adenoma requires constant control over the state of swelling with high likelihood of its regeneration and malignization.

Such growth of tissues is diagnosed quite rarely.

Stages of the Pathology Development 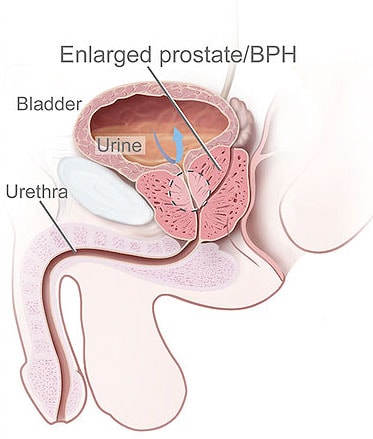 There are three degrees of prostate increase: compensated, subcompensated, and decompensated. Diagnostics of the disease should take into account patient’s condition, presence of characteristic symptoms, as well as structural and functional alterations in the organs of urinary system.

Compensated stage starts with insignificant disorders with urination. At first, a man may have precipitant urination. Emptying of urinary bladder requires additional efforts. In order to accelerate the rat of urination, a patient needs to toughen muscles of pelvis and abdominal wall. Urine stream may be weak and even discontinuous for a couple of seconds. Regardless of urination difficulty, this stage allows emptying bladder completely.

While examination of a patient, impairment of the structure of kidneys and urinary tract is absent. Timely consultation by a specialist, therapy of BPH on compensated stage may be quite different: some men have this period for 3-4 years, others – from 10 years and longer.

Subcompensated stage begins with the moment when urinary bladder cannot complete its function properly. It means that resulting from regular pelvic muscles tension during urination, urinary bladder walls have lost their elasticity and cannot pull out accumulated urine. At first, the volumes of remained urine after urination do not exceed 20-50ml. Further progression of the disease may increase the volume up to 500ml. At this stage, the first disorders of kidneys functioning are observed. Conservative treatment of men with subcompensated stage of benign prostatic hyperplasia doesn’t give expected therapeutic effect. In the majority of cases, patients are recommended undergoing surgery with the usage of minimally invasive endoscopic instrument.

Benign prostatic hyperplasia in decompensated stage is manifested by volumes increase of residual urine up to 800ml and more. Moreover, many men experience uncontrolled urination. Regular detention of urine leads to such complications as kidney stone disease, severe renal failure, and intoxication of the organism by the products of nitrogen metabolism. In case a patient has such symptoms as complete absence of appetite, nausea, weakness, acetone odour, immediate medical attendance is required. Absence of therapy may lead to lethal outcome.

As benign prostatic hyperplasia is similar to some other urological diseases according to its manifestations, the first stage of diagnostics requires differential diagnostics for exclusion of urinary bladder inflammation, neurological disorders, diabetes, etc. At suspicion on adenoma, digital rectal investigation is conducted for examination of glandular shape, possible presence of nodes and indurations, and morbidity.

After making the primary diagnosis, examination is conducted according to the following scheme:

Before starting treatment, a patient can be prescribed biopsy for exclusion of malignant growth.

Before starting treatment, a patient can be prescribed biopsy for exclusion of malignant growth.

BPH treatment includes case monitoring, conservative therapy and surgery. Small swelling sizes, its slow growth and absence of symptoms connected with impaired urination are indication to case monitoring. A patient is recommended changing his life style excluding of all factors from it provoking intensive tumor growth. A special attention is to be paid to correct balanced dietary and water-intake regime.

A patient is to walk and do exercises daily to prevent from congestive phenomena in pelvic area. Conservative BPH treatment is indicative to those patients who do not have complications and structural changes of the organs of urinary system.

Therapeutic scheme includes the medicines for relieving of acute symptoms, normalization of urination and blockage of adenoma growth:

Operative treatment is applied in case of involvement of upper urinary tracts or absence of the effect from the intake of medicamentous products. The indications to urgent surgery conduction are kidney stone disease, acute detention of urine, severe renal failure, relapses of inflammatory processes in organs of urinary system. The main aim of any surgery is decrease of pressure on upper urethral section and increase of its lumen for normalization of urination process. In case the disease is not at advanced stage and serious complications are absent, a removal of the only that part of the gland which takes pressure on urinary tract is conducted.

Surgery may be conducted by means of the one of the following methods:

In case patient’s condition doesn’t allow performing operative treatment, one of the following ways of urination process normalization is used:

Benign prostatic hyperplasia occurs with reaching of elderly age; therefore, there are no direct prophylactic measures.

Nevertheless, symptoms may be delayed if a man:

Ecdysones are substances of hormonal character with high biological activity. Thus, ecdysones of May Chang take stimulating and tonic action. These substances like Panaxsapogenol, Eleuterococus, Snowdon rose, and Lignan take immune-stimulating action. Herbal hormones are able to affect metabolic processes in organism. They are widely used in folk’s therapy of prostatic gland. Nowadays, there are a lot of vegetable-based hormones which are subdivided into groups in accordance with those groups of substances that are contained in human organism. In particular, estrogenic compositions of plants stimulate hormonal activity of sexual glands. Such compositions are concentrated in field bittercress, field pennycress, garden sage, as well as in seeds of many plants, Circassian walnut, and dandelion. Important role in BPH treatment belongs to complex usage of plant-based preparations containing sterol (sitosterols, stigmasterols, campesterols and especially – sitosterols). These features also refer to such plants as aralia, arnica, astragal, basil, creeping myrtle, cork tree, everlasting, elder, betony, cornflower, camelthorn, serpent grass, corn, gingseng, etc.